How are the FAA STCs dealt with in General Aviation? 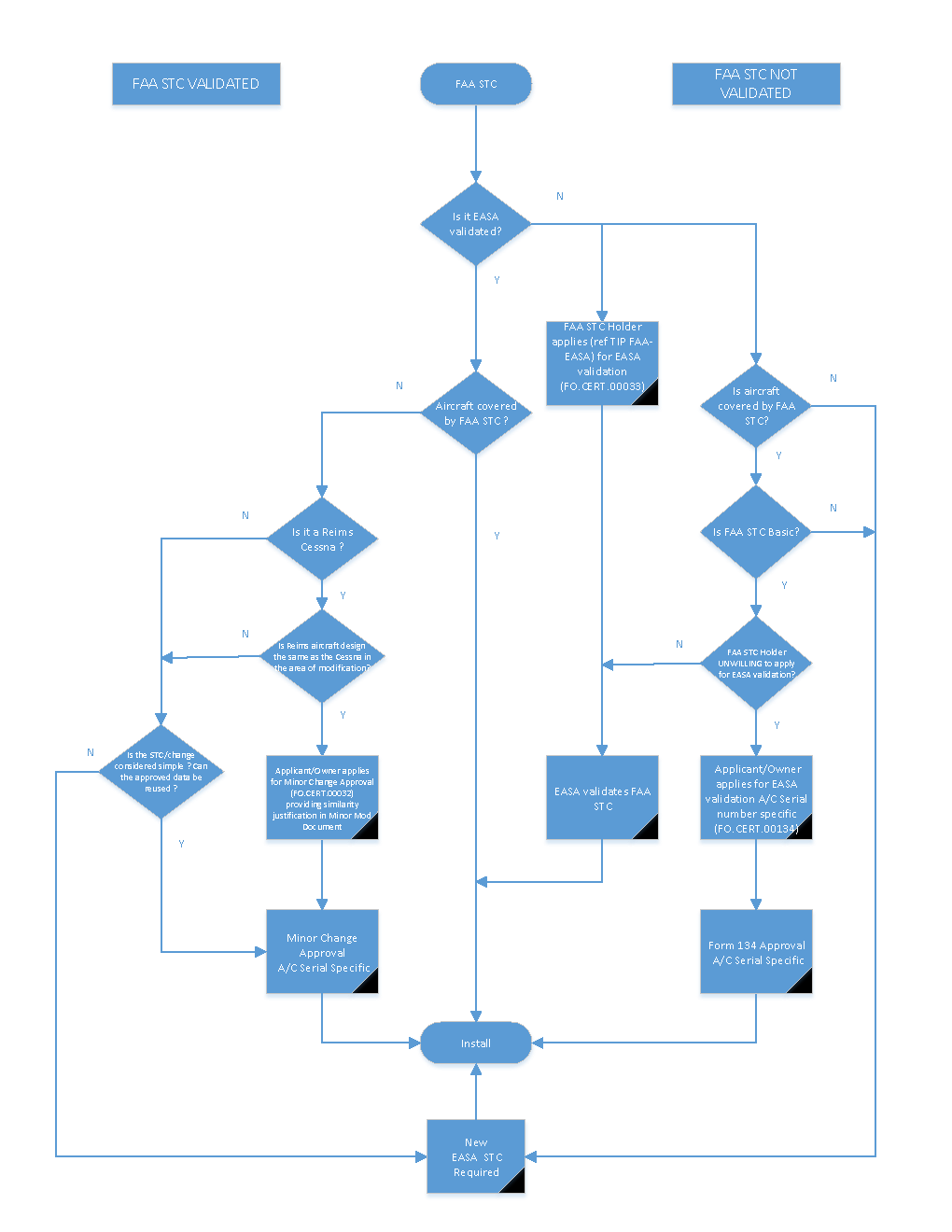 How does EASA deal with STCs on Reims-built Cessna models?

STCs approved on US-built Cessnas and their applicability to Reims-Cessna models.

Reims-Cessna was a French company that manufactured US-designed Cessna aircraft under licence. These included the F150, F152, F172, F177, F182, F337, F406 and their variants. These aircraft were identical to the US-built aircraft but the French aircraft were given DGAC Type Certificates. For this reason, FAA STCs approved for US-built Cessna models do not formally apply to Reims-Cessna models; this also applies to validated STCs. However, because the Reims-Cessna aircraft are identical to the US-built aircraft, and because there is no technical investigation necessary to extend the applicability of STCs to the French-built aircraft, EASA can extend the grandfathered approval to Reims-built aircraft but the approval has to be legally recorded. The mechanism that is used is the minor change, even if the modification would normally be classified as STC (ie, a major change). The applicant should apply on an EASA Form 32 referring to the FAA STC and its EASA grandfathered approval in the application.

Note that all Reims-Cessna models are now covered under FAA Type Certificates, with the exception of the FTB337G and GA which are covered by EASA SAS and the F406, which is still the responsibility of Reims Aviation Industries (RAI).

How does EASA deal with Applicable Model Lists?

In general, an STC can apply to only one Type Certificate. Certain exceptions can be made where the installation of a piece of simple equipment is clearly identical from one aircraft type to another, but EASA procedures state that an STC should apply to one TC only. Each new TC should be the subject of a new application.

This principle also applies to the validation of FAA STCs.

My aircraft has been modified in the USA by Form 337 action. Can EASA accept this?

“Except for alterations on critical components, FAA-approved or accepted alterations per 14 CFR Part 43 installed on a used aircraft exported from the U.S., regardless of the State of Design of the aircraft, are considered approved by EASA at the time of import to the European Union. EASA shall accept such FAA alteration data when substantiated via an appropriately executed FAA Form 8110-3, FAA Form 8100-9, FAA Form 337 or logbook entry.

Alterations on critical components must be EASA-approved via STC, in accordance with TIP paragraph 2.2 (Design Approval Procedures for Supplemental Type Certificates (STCs)).

An FAA STC whose installation is documented on a Form 337 must be approved by EASA in accordance with TIP paragraph 2.2.”

How do I apply for an STC approval?

Applications can be of two types:

How do I know whether an STC has been grandfathered?

Any STC approved or validated by any member state before the establishment of EASA is deemed to be 'Grandfathered' under Regulation 1702/2003 Article 2 (3)(a). Unfortunately, there are tens of thousands of these approvals and it has not been possible to put together a database. We normally recommend an enquirer to contact the STC holder (the FAA website has these details) and check with them directly whether they have any EU customers. The STC holder should know who his customers have been because he has obligations to maintain continued airworthiness for his modifications.