EASA applied the classification shown below to develop a different set of technical rules for air operations (e.g. CAT, NCC, NCO, SPO operations), taking into account the principle of proportionality and the need to have different safety levels. The safety levels were based on a risk hierarchy, and the rules for non-commercial operations were developed to achieve the following objectives: 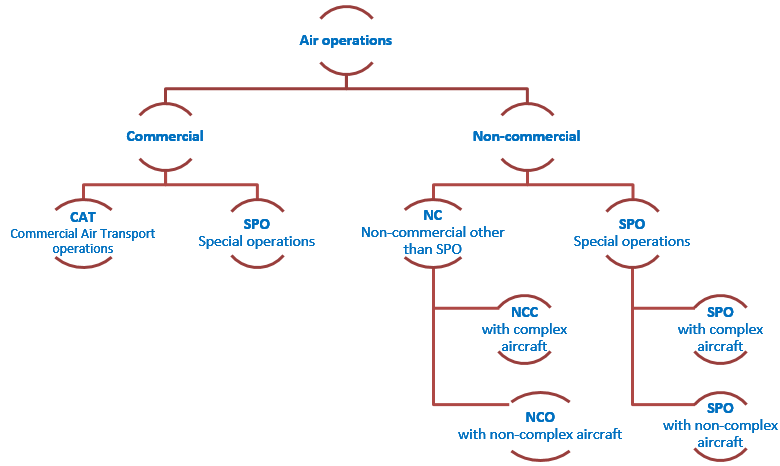 Difference between NCO and NCC

EASA developed two different sets of rules for non-commercial operations, depending on the complexity of the aircraft:

The term ‘complex motor-powered aircraft’ is defined in Regulation (EU) 2018/1139 as follows:

Different from this definition, ICAO defines a large aeroplane (in Annex 6 Part II) as ‘an aeroplane of a maximum certificated take-off mass of over 5700 kg’.

The AIR OPS Regulation (EU) 965/2012 contains an alleviation in this sense: Article 6.8 states that operators of complex motor-powered aeroplanes with an MCTOM at or below 5700 kg, equipped with turboprop engines, involved in non-commercial operations, shall operate those aircraft in accordance with Annex VII (Part-NCO).

In March 2018, the European Commission published Regulation (EU) No 2018/395 on the operation of balloons, establishing less complex provisions, proportionate to the complexity and risk of such operations.

The Air Ops Regulation (EU) 965/2012 was also amended by deleting all the requirements applicable to balloon operations (in the amending regulation (EU) No 2018/394).

Shortly after, EASA published the related Decisions containing AMC and GM to the new regulations.

The Balloon Rule Book – Easy Access Rules, containing both the Commission Regulation (EU) 2018/395 and the EASA AMC and GM, is also available for download. For now, this book contains only the air operations rules for balloons, but in the future, it will include also the licensing rules for balloons and the airworthiness rules for balloons.

The new regulation on balloon operations will apply from 8 April 2019. Until then, the Member States will continue to apply the current rules. 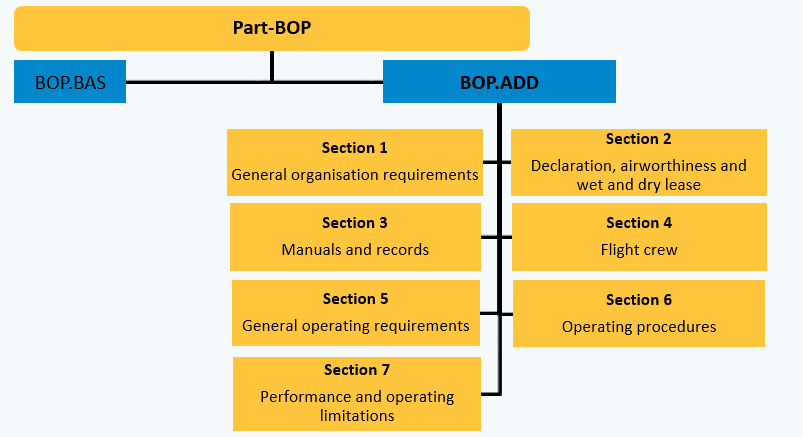 For more information about the new operational rules for balloons, we invite you to read the interview with Jan Boettcher, the EASA Air Operations expert.

Commission Implementing Regulation (EU) 2018/1976 on sailplane operations was published by the Commission on 20 December 2018.

The associated EASA AMC and GM were published on 28 January 2019 on the EASA Official Publications page.

The sailplane rules were extracted from Reg. (EU) No 965/2012 on air operations (except for the authority requirements, which remained in Part-ARO) and published in a new, separate regulation addressing only the air operations with sailplanes. The new regulation establishes simpler rules, proportionate to the complexity and risk level of these operations, and reduces the regulatory burden for sailplane pilots and operators. 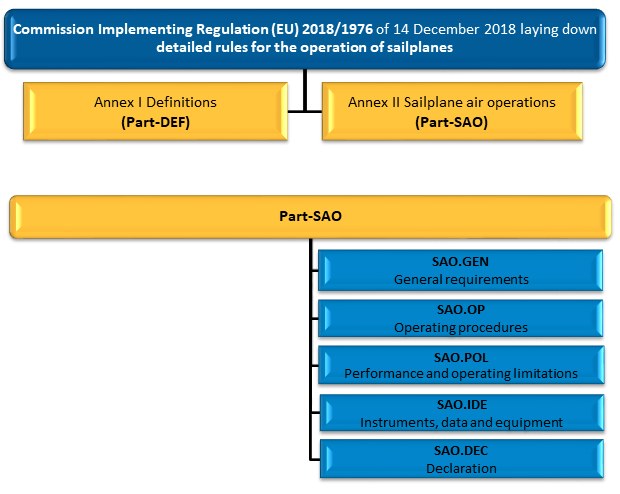 A new SIB was published in April 2018 for GA pilots, aeroclubs, pilot training organisations and competent authorities, containing details about the effect of alcohol consumption on the flying capabilities, as well as a number of recommendations.

The SIB can be downloaded from this page.