The number of flights at EU27+EFTA airports increased by 15% between 2005 and 2019 to 9.3 million,while passenger kilometres almost doubled (+90%). However, flights declined to just 5.1 million in 2021 due to the COVID-19 pandemic.
At 98 major European airports during 2019, 3.2 million people were exposed to Lden 55 dB aircraft noise levels and 1.3 million people were exposed to more than 50 daily aircraft noise events above 70 dB. This is 30% and 71% more than in 2005 respectively.
The top 10 airports in terms of Lden 55 dB population exposure in 2019 accounted for half of the total population exposure across the 98 major European airports.
The CO2 emissions of all flights departing from EU27+EFTA airports reached 147 million tonnes in 2019, which was 34% more than in 2005.
Long-haul flights (above 4,000 km) represented approximately 6% of departures during 2019 and half of all CO2 and NOx emissions.
Single-aisle jets had the larger share of flights and noise, but twin-aisle jets had the larger share of fuel burn and emissions.
The average grams CO2 emitted per passenger kilometre went down by an average 2.3% per annum to reach 89 grams in 2019, equivalent to 3.5 litres of fuel per 100 passenger kilometres.
In 2020, due to the COVID-19 pandemic, emissions reduced by more than 50% and population exposure to noise fell by about 65%, while the average grams CO2 emitted per passenger kilometre increased back to 2005 level.
Fleet renewal could lead to reductions in total noise exposure at European airports as measured by the Lden and Lnight indicators over the next twenty years.
In 2050, it is predicted that in-sector measures could reduce CO2 emissions by 69% to 59 million tonnes compared to a business-as-usual “technology freeze” scenario (19% from Technology/Design, 8% from ATM-Ops, 37% from SAF and 5% from electric/hydrogen aircraft). 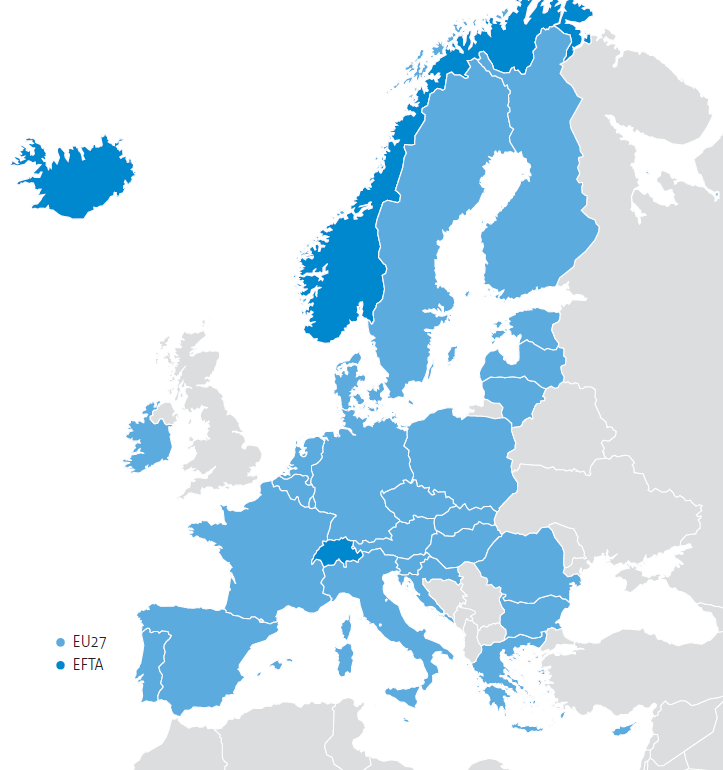 Historical air traffic data in this section comes from Eurostat and EUROCONTROL. The coverage is all flights from or to airports in the European Union (EU27)10 and European Free Trade Association (EFTA). The forecast of European flights comes from the EUROCONTROL Aviation Outlook11 (EAO) [9] . For more details on models, analysis methods, forecasts, supporting data sources and assumptions used in this section, please refer to Appendix C.

10 The geographical scope is constant through the entire time period covered in this Chapter. Consequently, the data does not include UK for those years preceding Brexit.
11 The EAO was prepared before the start of the invasion of Ukraine by Russia. At the time of writing, the impact on traffic is high for some States adjacent to Belarus, Russian and Ukraine. However, the overall impact on the full European network remains relatively small. The focus of the EAO is 2050.

Explore the sections in the Overview of Aviation Sector chapter