Airport noise exposure reached a peak before the COVID-19 outbreak

The average noise exposure around major EU27+EFTA airports, as measured by the Lden and Lnight indicators12, significantly increased during the five years preceding the COVID-19 outbreak. In 2019 the population exposed to Lden 55 dB and Lnight 50 dB was respectively 30% and 50% larger than in 2005 ( Figure 1.8.  and  Figure 1.9. ), and single-aisle jets accounted for 63% of the landing and take-off noise energy, against 22% for twin-aisle  ( Figure 1.13. ). Due to the drop in traffic in 2020, the total Lden 55 dB and Lnight 50 dB population counts were about one third of the 2019 values.

Under the three traffic growth scenarios, fleet renewal13 with the latest generation of quieter aircraft is expected to lead to a reduction in average noise exposure as measured with the Lden and Lnight indicators over the next two decades. This is primarily due to the fleet penetration of the new single-aisle aircraft types (e.g. A320neo, Boeing 737MAX), which account for the majority of landing and take-off noise energy ( Figure 1.13. ). In addition, there has been the closure of Berlin Tegel airport in 2020. However, these indicators may start to increase again in the longer term if manufacturers do not develop new quieter types of aircraft to offset the growth in traffic.

The local noise situation is very diverse among the 98 major EU27+EFTA airports covered within this assessment. Some airports have seen their Lden 55 dB contour area reduce by half between 2005 and 2019, while others have seen it grow by a factor 8. However, the majority of airports (82 out of 98) have increased their Lden 55 dB contour area over this time period. The top 10 airports in terms of Lden 55 dB population exposure during 2019 accounted for half of the total population exposure across all 98 airports.

To complement the average Lden and Lnight noise indicators, the N50A70 population indicator14 has also been assessed ( Figure 1.9. ). In 2019, 1.3 million people were exposed to more than 50 aircraft noise events above 70 dB per day at the 98 major airports, which is 71% more than in 2005. This indicator could progressively increase over the next decades and exceed its 2005 level under a frozen technology scenario.

In 2019, using the dose-response curves15 developed by the World Health Organization Europe [1] , the number of people highly annoyed by aircraft noise was estimated to be 4.0 million, and the number of people suffering from aircraft-induced high sleep disturbance was estimated to be 1.7 million. This is respectively 24% and 31% more than in 2005. 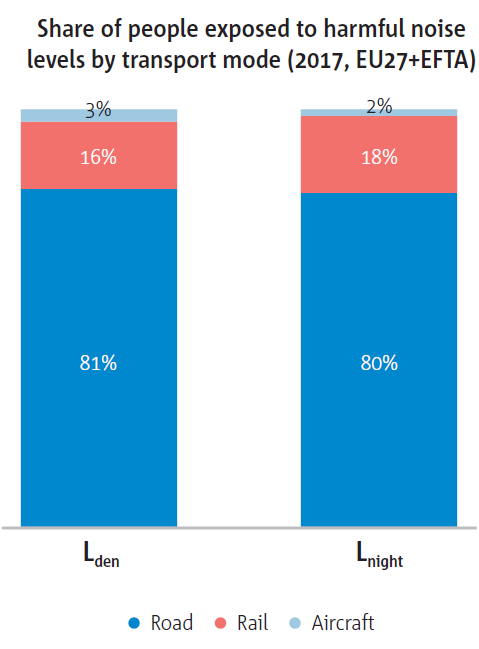 Based on data reported by Member States every five years under the Environmental Noise Directive 2002/49/EC, it is estimated that aviation represented 3% of the population exposed to transport noise in EU27+EFTA during 2017. This is slightly more than in 2012 (2.6%) [2] . While this is a smaller share than road and railway, aircraft noise is generally perceived as more annoying than road or railway noise and health effects exist at noise levels around 10 dB lower than other sources  [1] . Further comparisons between the cost of aviation noise versus noise from other transport modes can be found in the EC’s handbook on the external costs of transport [6] .