Air pollution has impacts on the health of the European population, particularly in urban areas [8] . The most significant air pollutants are particulate matter (PM), nitrogen oxides (NOx) and ground-level ozone (O3). Despite the overall decrease of emissions and improvements in general, air pollutant emissions from aviation have increased within the EU.

Aircraft engine NOX emissions (nitric oxide – NO and nitrogen dioxide – NO2) are primarily produced at high pressure and temperature combustor conditions during take-off, and are of a concern in terms of health impacts linked to impaired immune and respiratory functions as well as increased response to allergens.

In the presence of heat and sunlight, surface NOX reacts with VOCs, HC and CO to form ground level ozone or smog that cause health impacts [11] [12] .

In addition, NOX are precursors to other oxidised nitrogen compounds that contributes to the formation of secondary particulate matter18. Thus, NOX have both a direct and an indirect impact on air quality and the environment.

Particulate matter is a general term used to describe non-volatile (nvPM) or volatile particles (vPM) in various sizes and composition. At the engine exhaust, particulate emissions mainly consist of nvPM containing soot, or black carbon  [13] . Health impacts from PM emissions include effects on the cardiovascular and respiratory systems, with ultrafine particles able to enter the bloodstream and act as carriers for toxic substances. EU air quality limits exist for PM10 and PM2.5 concentrations, but not for ultrafine particle sizes. However, PM2.5 mass is considered a good indicator of general risk associated with exposure to particulate matter. Increased surface PM2.5 concentrations have been shown to lead to a rise in annual premature mortalities due to increases in cases of cardiopulmonary disease and lung cancer [14] [15] .

SO2 emissions result from the combustion of fuels containing sulphur. Most of the sulphur is emitted as gaseous sulphur dioxide (SO2), but about 5% is fully oxidised to form gaseous sulphuric acid (H2SO4), which can subsequently condense on the surfaces of other ambient or soot particles in the atmosphere. While the current limit for sulphur in aviation fuel is 3,000 ppmv (parts per million by volume), actual levels are believed to be averaging ~600 – 800 ppmv although data availability is poor [13] .

Ozone is a secondary pollutant, not emitted directly by aircraft engines, but produced when carbon monoxide (CO) or volatile organic compounds (VOCs) are oxidized in the presence of nitrogen oxides (NOX) and sunlight. Low altitude ground level ozone is a major component of smog, which can cause several health issues, respiratory problems, and damage to crops and ecosystems [16] .

18Secondary particulate matter is formed from chemical reactions in the atmosphere from the gases ammonia (NH3), sulphur dioxide (SO2) and nitrogen oxides (NOX), and from organic compounds.

The measures introduced by most European countries in response to COVID-19 led to significant reductions in emissions of air pollutants, particularly in the transportation sector. Zurich airport analysed air and road traffic, emissions and measured concentrations of various pollutants for a pre-COVID period in 2019 compared to a period in 2020 [21] . The study found that the 91% drop in air traffic led to an 87% reduction in NOX emissions at the airport, but only a 44% reduction in NO2. Reductions in ultrafine nvPM number were of a similar magnitude to NOX. These results are also driven by influences from other-than- aircraft sources, such as regional road traffic, that also contribute to the emissions concentrations at the airport. It was also noted that the effects of emissions from airport sources significantly decrease over short distances from the airport, and that a decrease in concentrations at the airport is not carried over into the region level at the same rate. This confirmed previous modelling that shows a rapidly decreasing influence of the airport outside its perimeter. 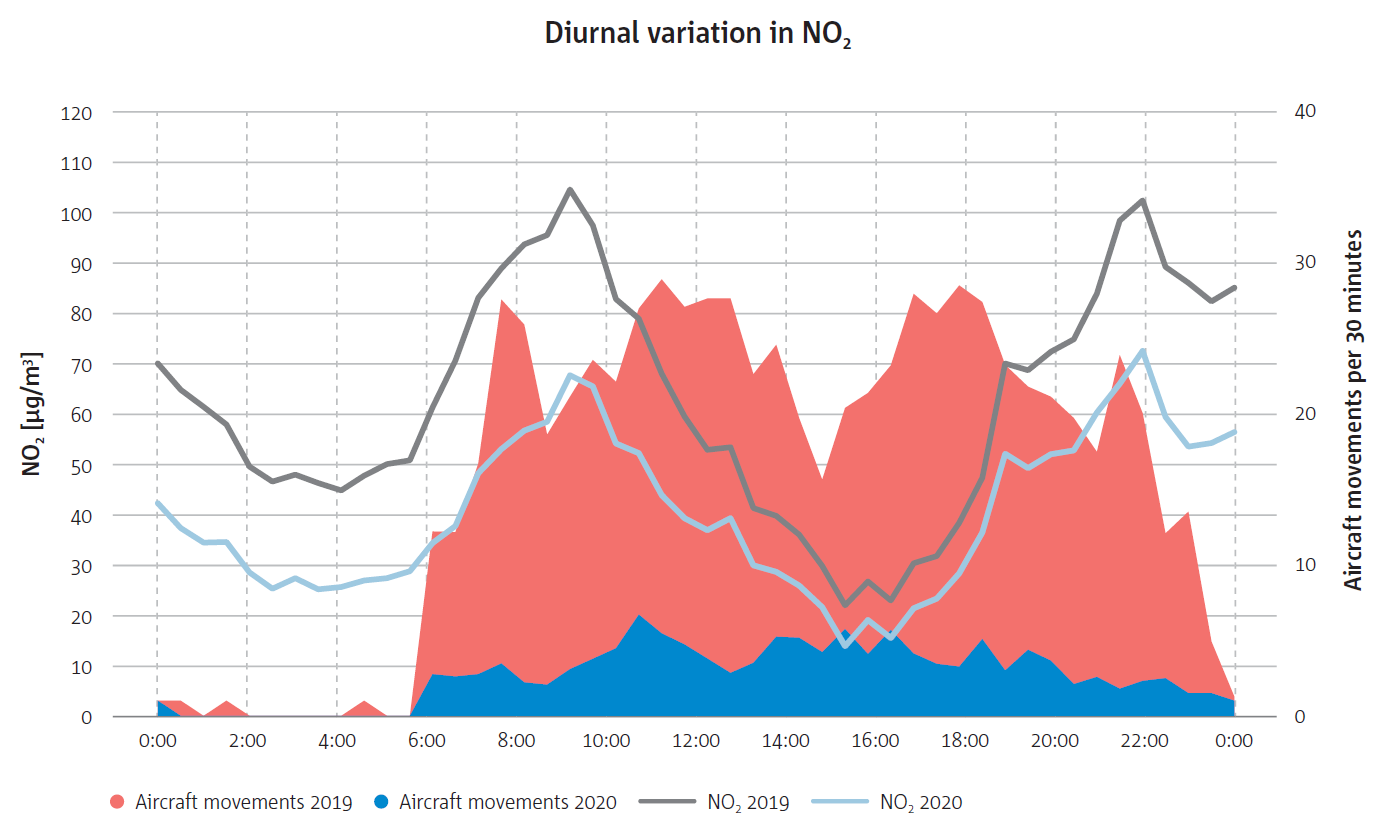 These findings are consistent with those from additional studies performed on this topic [22] [23] . While the effects of lockdown will be temporary, these findings provide insight into the potential for mitigating public health risk by reducing ’business as usual’ air pollutant emissions from economic activities.

A recent review of articles identified elevated levels of PM2.5 and ultrafine particles (UFP) in and around airports [17] . When assessing the impacts of PM on health, it is important to focus on the number count, as it is a more significant indicator for ultrafine particles than mass and size. As a significant source of UFP, aircraft engine emissions can cause increases in ground-level particle number concentrations (PNC) over large areas downwind of airports [18] [14] . The spatial extent and magnitude of the impact from UFP varies depending on factors including wind direction and speed, runway use pattern and flight activity. This can encompass large populations in cities where airports are located close to the urban residential areas, such as in Amsterdam, where the PNC was found to be elevated 7 km downwind of Schiphol Airport [19] .

While a number of articles report adverse health effect impacts (e.g. increased rates of Premature death), more research is needed on the link between particle size distributions and specific airport activities to evaluate long-term impacts. In order to better inform UFP exposure assessment efforts, it is important to distinguish aviation-related contributions from other urban sources and to characterise them independently. This can be particularly challenging in urban areas with dense road networks. However, key differences exist that can help distinguish between the spatial impact of road traffic and aircraft UFP emissions [20] .