Figure 5.4. estimates ATM-related inefficiency based on proxy indicators. Ongoing work has highlighted that further inefficiencies related to all stakeholders may be demonstrated by the use of indicators that are based directly on fuel burn or CO2 emissions as opposed to operational proxies such as time or distance flown. Any new metrics should be measured and monitored according to the interdependency of all the stakeholders involved in the evolution of the flight trajectory and their impact upon fuel efficiency.

As explained in 5.2, discussions have already been triggered on the limitations of existing metrics. The sector should aim to move away from proxy metrics based on additional time or distance flown to those based on actual CO2 emissions. EASA and EUROCONTROL, together with ANSPs, are currently working to identify and develop a suite of metrics that could more accurately measure ATM performance and the benefits from the actions of individual stakeholders.

One such metric being considered, developed by the Network Manager in 2019, is referred to as the Excess Fuel Burn indicator (XFB) and is based on actual operational data and modelled fuel burn [11] . The XFB is the fuel inefficiency on a particular route for a particular aircraft type, compared to a reference based on the best performer on that city pair / aircraft type combination (it can either be the 10th percentile- XFB1042 or the 5th percentile - XFB5). Based on this indicator, the average excess fuel burn per flight in the Intra-Network Manager (Intra-NM) area in 2019 was estimated to be 8.6% and 11.2% for XFB10 and XFB5 respectively. It should be emphasised that the XFB indicator measures the system inefficiency linked to all stakeholders such as airports, flight planning processes, aircraft operators, ATC and the network itself.

Considerations may still be required to address those situations where optimised flight routings of aircraft operators, may not necessarily align with the NM calculated environmentally optimised trajectory (i.e. modelled lowest fuel burn), and therefore reductions in fuel inefficiency clearly needs further analysis with all involved stakeholders.

Figure 5.5. 43 shows that XFB10 in the Intra-NM Area ranged between 7.8% to 9.8% during 2019. Following the start of the pandemic, the XFB10 fell to between 2 and 5% during 2020 and 2021, finishing at 3.8% at the end of 2021. This demonstrates the network efficiency improvements that could be achieved in low traffic periods if the large number of current airspace restrictions are removed within the current airspace configuration. The figure also illustrates that there may be system constraints that are challenging to remove even when traffic numbers are at a minimum, such as military areas and airport terminal airspace constraints.

Fuel burn per flight can be broken down to demonstrate the impact that flight distance, aircraft operations or aircraft type have on fuel efficiency. In relative percentage terms, XFB10 is higher for the short-haul flights and reduces as the flight distance increases. This is due to longer flights typically spending a higher proportion of their flight time in the more fuel-efficient cruise phase. Figure 5.6. shows the actual versus reference44 fuel burn during 2019-2021 for all flights in separate distance bands.

Fuel tankering is a practice whereby an aircraft carries more fuel than required for its safe flight in order to reduce or avoid refuelling at the destination airport for subsequent flight(s). It is also referred to as “over tankering”.

Fuel tankering can be performed for two reasons:

As the use of economic tankering is driven by cost savings, the greater the cost imbalance in fuel and refuelling services between two airports, the more it is likely to be used by airlines.

Economic tankering increases aircraft fuel consumption and results in unnecessary greenhouse gas emissions. A recent study [12]  estimated the number of times this practice would offer an economic benefit and the quantity of extra CO2 emissions which would result. This study was limited to flights of between 1,500 and 2,500 nautical miles (2,780 to 4,630 km), which mainly corresponds to short-haul and medium-haul flights. It was estimated that, in 2018, 21% of ECAC flights performed economic fuel tankering, representing a net saving of €265 million per year for the airlines, but burning an unnecessary 286,000 tonnes of additional fuel (equivalent to 0.54% of ECAC jet fuel used), or 901,000 tonnes of CO2 per year. The environmental impact of economic tankering is therefore far from negligible and could increase the individual fuel consumption of an aircraft by 5 to 25% depending on the distance flown.

Full and partial economic tankering practices are not limited to short and medium-haul flights. Aircraft fuel tanks are usually designed to allow maximum range, although aircraft do not systematically fly these long distances. As such, it becomes feasible to carry much more fuel than required in order to limit or avoid refuelling at the destination airport.

As part of the ‘Fit for 55’ package, adopted in July 2021, the Commission proposed a Regulation to boost the uptake of SAF in air transport in the context of the ‘ReFuelEU Aviation’ initiative [13] . This addresses tankering and ensures a level playing field for sustainable air transport by requiring airlines to uplift from EU airports a certain % of the jet fuel they require to perform flights within and from the EU.

In addition, EASA has published Decision 2022/005/R with an objective to facilitate the implementation of new requirements on fuel/energy planning and management [14] [15] . This applies from 30 October 2022, and will improve efficiency through the introduction of the ‘fuel schemes’ concept that will, while maintaining a high level of safety, allow operators to optimise and reduce the amount of fuel carried during operations. The potential savings in annual CO2 emissions are 3 million tonnes. 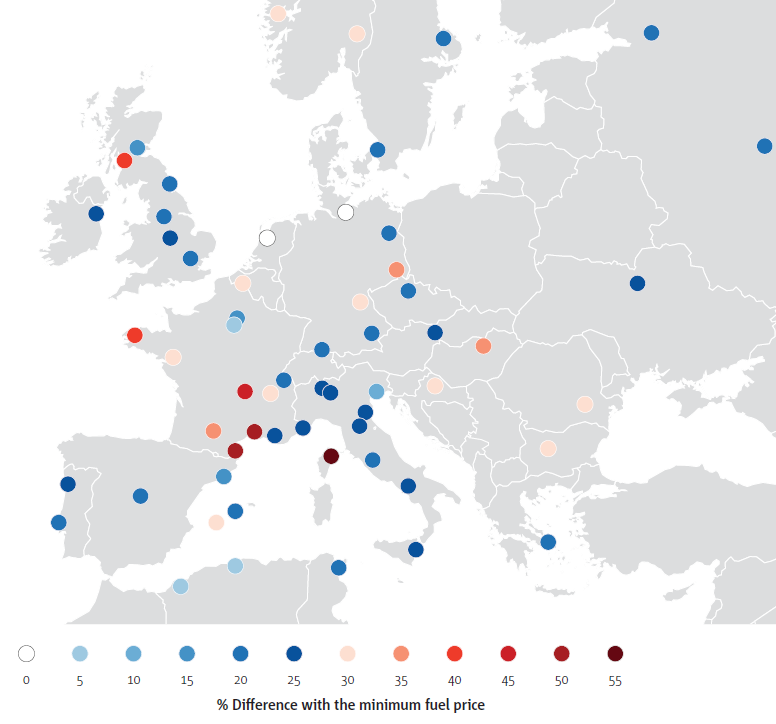