Before you fly your drone, you need to check where you are allowed to fly. We covered this in detail in this EASA light article “Geo-Zones – know where to fly your drone”. Wherever you are flying it is likely that you will also need to think about the safety of any people in the area. As a general rule, when you operate in the ‘open’ category, you are not allowed to fly over people who are not involved in your drone flying / activity. This means you need to keep the right distance from people and property. This is both for their safety and also to respect people’s privacy.

This article provides more information about the concept of involved and uninvolved people as described in the EASA drone rules. This will help you to fly safely near people and understand what is allowed.

The drone rules define “Involved people” in a drone operation as: the remote drone pilot, the observer, the operator and the customer. Depending on the situation, you may have some or all of these people at your flying location. The customer, for example, could be someone being filmed or simply someone overseeing the work. They are all aware of the flight plan and the work you are doing with the drone, the instructions and safety precautions given by the drone pilot.

Involved people should be focused on the drone operation and not to be busy with any other things, such as talking on the phone or eating. During the operation, involved persons should be aware of the location of the drone at all times and be ready to take action to protect themselves and others if the drone behaves in an unexpected way.

You also need to consider how “involved” or “uninvolved” persons might react to a drone possibly falling from the sky and whether any people present would encounter obstacles on their escape path, such as fences or roads. This should be part of your risk assessment before conducting the operation.

Generally, people other than those previously described are “uninvolved people”. They are not participating in the drone operation and might not be aware of it. Animals are also classed as “uninvolved”, so you need to think about them as well.

Any crowd of people are considered by definition to be “uninvolved”. A “crowd” is not defined by a specific number of people, but by the limitations this may place on the possibility for individuals within that crowd to move around, to evade a drone which is out of control. If people are so densely packed that their possibility to freely escape or move away from the drone is limited, then that is considered to be an assembly of people (this is the term used in the drones regulation).

Examples of assemblies of people include:

Flying over people with different categories of drones 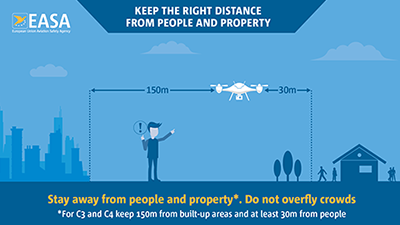 As we described, you cannot normally fly a drone over people. An exception to this is if you fly with a privately built drone with a weight below 250 grams or a drone purchased on the market with a class identification label 0 or 1 mark (compulsory from 01 January 2024), that can fly in subcategory A1. However, you need to keep any flight over people to a minimum.

For C class 3 and 4 drones, keep 150 metres from urban areas and at least 30 metres from crowds. You can find all our 'Infographics for Drones' on the EASA Website. 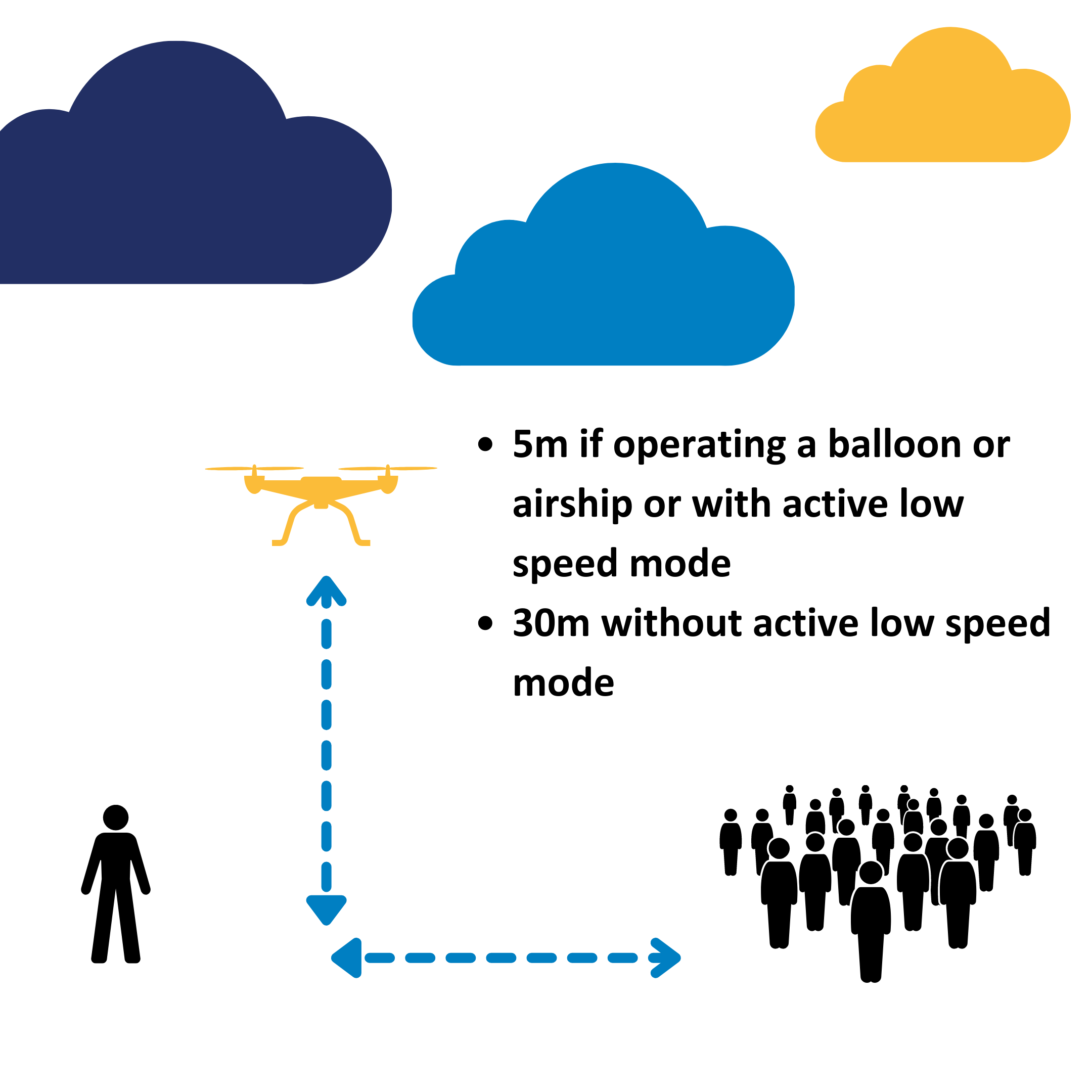 In all other cases (drones with class identification label 3, 4, 5 or 6 marks or privately built and heavier than 250 g), you need to ensure that no uninvolved people are present within the range of the operation.

As a drone pilot/operator, you are responsible for the safety of all surrounding you, but also for being a good ambassador and showing how exciting, entertaining and safe flying a drone can be. It is therefore important to carry out a risk assessment before you fly to avoid problems later.

Stay informed and up to date – follow EASA Light

EASA will share all the latest information on drones on EASA Light.

EASA video: Flying your drone near people
EASA Light: Geo-Zones – know where to fly your drone
EASA Infographics for Drones