I am extremely surprised and disappointed by the rules proposed by EASA to regulate civilian drones. Stringent regulations combined with a narrow perspective create serious damages to industry innovation. 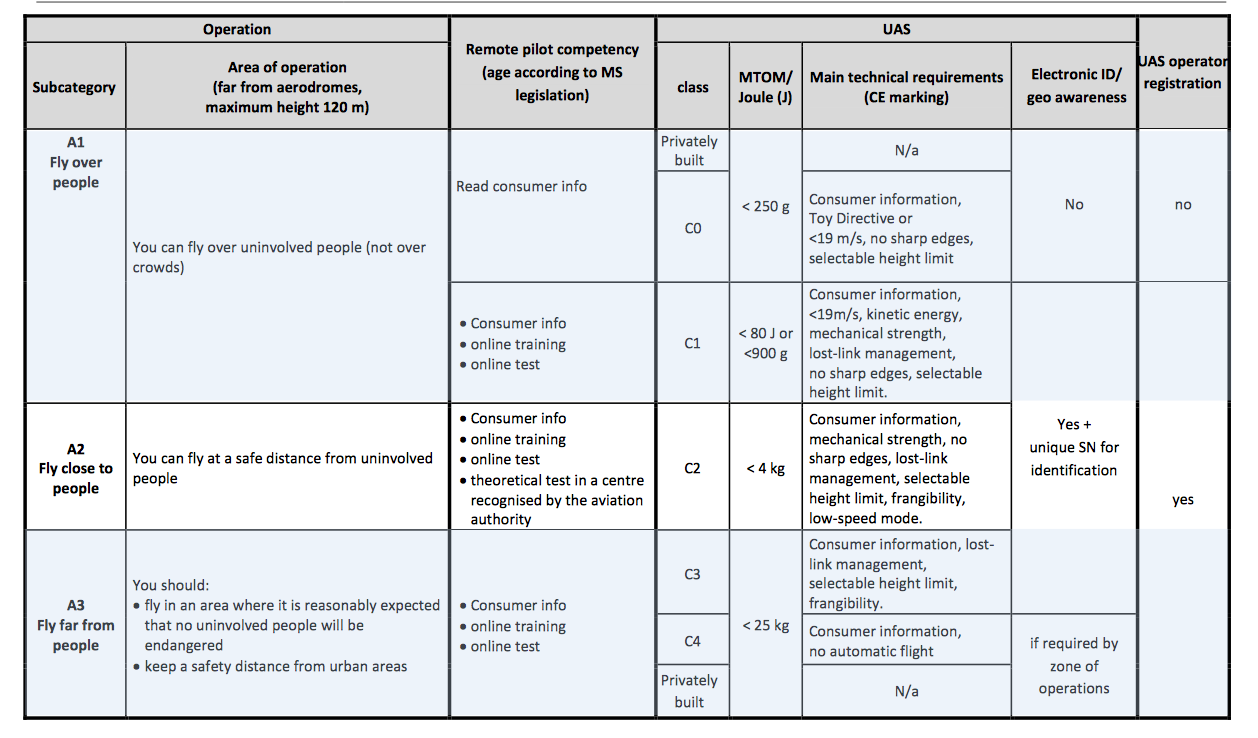 Drones with mass greater than 249g are considered potentially dangerous only based on takeoff mass.

The danger with consequent need for entry into a sensitive category should depend on the force exerted on the surface in case of impact.
A drone use case doesn’t necessarily involve heights and operating speeds such that it makes sense to consider any higher than 249g weight drone as potentially dangerous per se, without exceptions.
(Is a 1kg drone that falls from 2 meters high or a 249g drone that falls from 70m more dangerous?)
Not to mention its density: Is more dangerous a 249g piece of lead during a fall or 1 kg of low density plastic foam?

The danger factor is considered on the base “near” or “far” from the inhabitated areas and people without any exception based on the specific situation e.g. public areas, low risk areas, private properties (and previous point).

A drone could also be used in operations inside buildings or other private property in an enormous variety of situations.
(Is a 249g drone falling on a fast road or a 1kg drone that falls into your home garden or an industrial warehouse at few meters from the ground, or on the sea, more dangerous?)

Due to these rules will be imposed complications and restrictions (not mentioning insurances and licensing obligations) that will preclude many application scenarios and opportunities in the tech sector.
Anything with propellers that can soar in flight is a drone, but the danger factor is strictly dependent on the situations and conditions of use.

Over-regulation killed the light twin fleet. Looks like EASA is going down the same road with drones.

The speed of a drone is irrelevant, the speed of an aircraft impacting a drone is the not. In case you haven’t figured it out, fixed wing aircraft can’t come to a stop to figure out whether there is a collision danger. If should a collision occur for the drone it’s plastic and metal at risk; for the aircraft occupants it’s flesh and blood.

Everything is relevant. And a drone (especially a civil drone) doesn't necessarily have to fly at aircraft heights, so honestly this answer is pretty out of context in regards of the exposed argument. Nobody here has written that if a drone flies slow at aircraft heights then is safe.

[~1988] Civil drones can fly at manned aircraft heights....I'm sure that will happen. So, there is still some regulation for this to be approved.....EASA is working on EU draft U-Space opinion. There were already 2800 of responses to that draft so in the coming year you can follow that discussion.

[~357] "Can" doesn't mean "necessarily have to". The root problem I'm talking about is exactly the bad attitude to consider specific situations as the only situations possible, creating not properly generalized rules that can work for them but aren't appropriate to handle different use cases and scenarios.

Silvio, the internet consultation for the draft regulation was published long time ago. The new regulation has been approved by EC in July.

I and many others who deal with indirectly related sectors (in my case AI and automation) were not aware of it, until it became official. Unfortunately it's difficult for those not directly involved in aviation and its institutions to be informed of these decisions in time to give a feedback before approval.