This article is intended to give you more information about dangerous goods in General Aviation so that you know what you can take onboard the aircraft safely and also what you really shouldn’t take if you want to live a long and happy life. It will also give you some tips on what to do if there is a fire or other problem with dangerous goods on the aircraft.

Download the Guide at the Bottom as well! Now available in English and French. The posters are available in different languages as well - these will be added to this page shortly - in the meantime please contact safetypromotion@easa.europa.eu to ask for a particular language of poster. 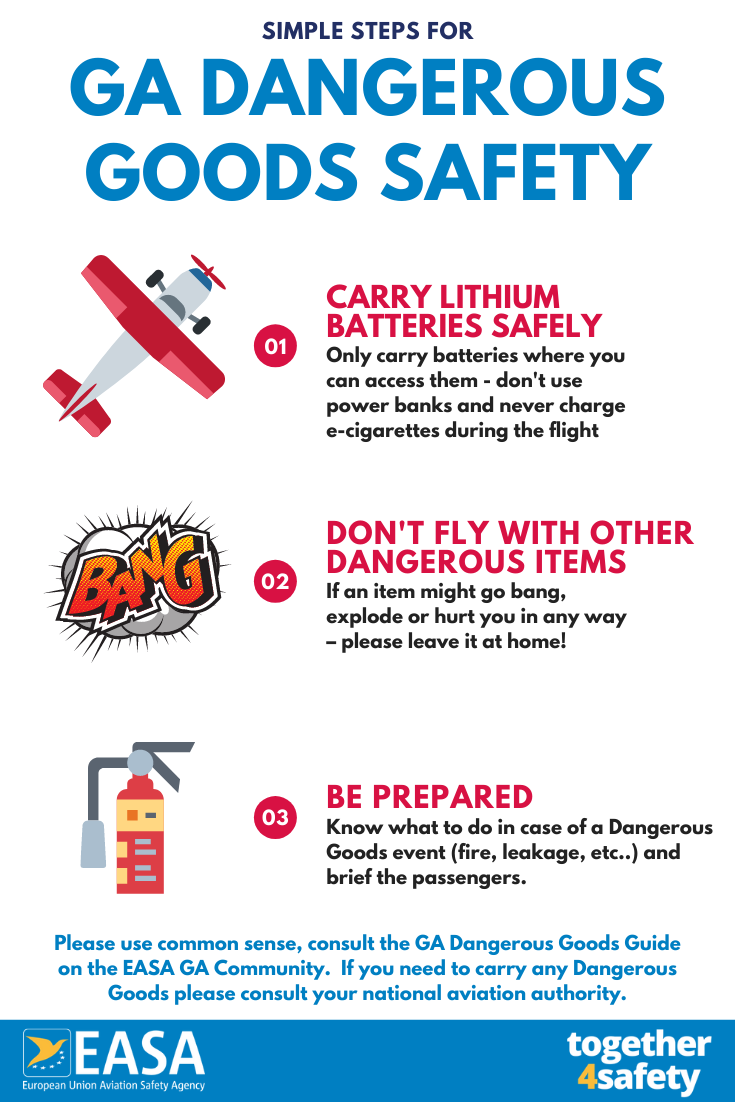 What are dangerous goods?

Dangerous goods have a long, complicated official definition.  At a basic level they are things that go bang, things might set on fire and generally things that might cause a difficult situation in the confined space of a small aircraft.

By way of example, on 25 August 2010 someone took a crocodile onboard a Let410 in the Democratic Republic of Congo. During the final approach the crocodile escaped and the aircraft tragically crashed when the passengers rushed towards the cockpit to escape the situation.  While we are not talking about wild animals here, there are many things that could lead to a problem inside the aircraft if brought on board.

Some examples to be aware of are listed below – if you need to carry dangerous goods as part of your flight or specialist operations speak to the dangerous good experts at your national aviation authority.

Consumer devices like phones, tablets and computers are fine provided they are bought from reputable shops and have CE or other markings. The problem comes with things that are easy to buy from non-reputable (online) stores like Power Banks, spare batteries and especially Electronic Cigarettes. There have been a number of events across the global aviation community that have been caused by lithium batteries going into thermal runaway.  The resulting effects of thermal runaway include overpressure, corrosive leakage, toxic vapors, overheating and in the most serious cases a fire.

Other Types of Dangerous Goods – Explosives, Flammable Liquids and other things that hurt

There are lots of other types of dangerous goods that are dangerous enough on the ground. They are even less of a good idea on an aircraft. Things like explosives (distress flares, ammunition and fireworks), flammable objects (fuels, paints, adhesives and hexamine lighters) and corrosives (acids, cleaning products) are just some examples.

Think about what you might do if you are flying and an event occurs (leakage, fire, …) occurs.  Don’t leave it to chance, consider these four final points.