While bird strikes are not a new risk to helicopters, the reduction in flying activity in some areas of aviation have considerably increased the number of birds in certain locations where helicopters regularly operate.  This article is based on and expands the EASA SIB Rotorcraft Operational Safety Procedures to Mitigate Bird Strike Risk of April 2021 and brings together a number of different resources from other sources to help helicopter operators, and others like heliport operators, understand and manage the risks involved. It is primarily intended for operators, Safety Managers, pilots including General Aviation pilots, instructors, engineers and inspectors and could be of interest for other personnel.

What does this article give you?

This article complements the information and recommendations provided in this EASA SIB  and brings in other material notably by AOPA, EGAST, TCCA, Airbus Helicopters and NGPT. See the References section.

Mitigation efforts on and by airports have proven to have shown significantly successful reduction of bird strike events and / or their consequences. You can access our free Wildlife Hazard Management Guide for Aerodromes on the Air Ops Community.

To get the formal part out of the way, a bird strike or bird ingestion for an engine, bird hit, or BASH (Bird Aircraft Strike Hazard) occurrence involves a collision between an aircraft and airborne birds or by extension, other species like bats or ground animals.

Some facts and figures to help understand the hazard

What this means for helicopter operations:

Even in a part 29 certified helicopter, the design-related provisions might not fully protect you and the aircraft and prevent damage or penetration from a situation more demanding than what is covered by the regulation. 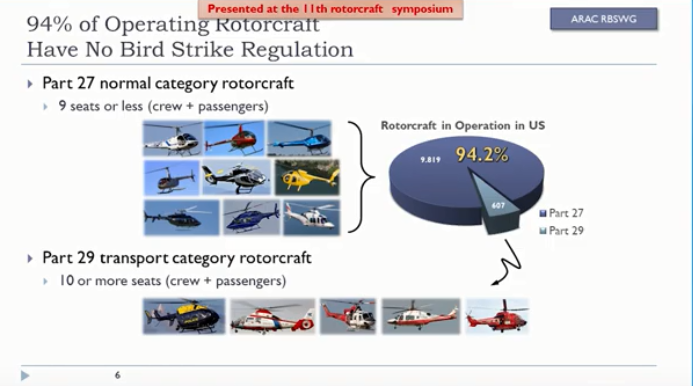 Recommendations presented in this article are primarily intended for operators, Safety Managers, pilots including General Aviation pilots, instructors, engineers and inspectors and could be of interest for other personnel.

Recommendations are organised in three categories:

Focusing on identifying and assessing the bird strike risk with the given facts: 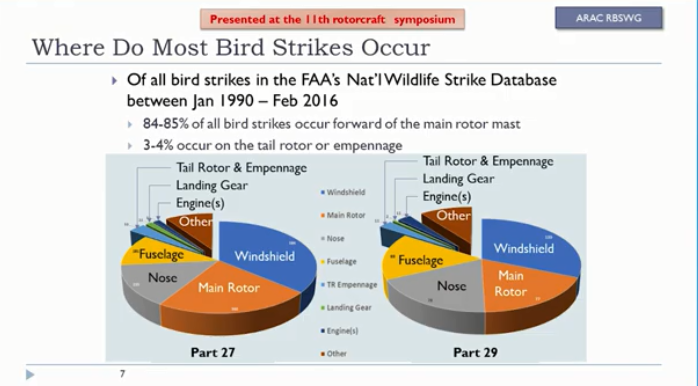 And then in terms of where on the helicopter:

This should help to visualise the situation:

The reason why this method, even if simplified is used here is because it is a very easy method to help identifying and mitigating the risk involved in using an off-airfield site.

The following should be made available to the rotorcraft operators and Safety Managers to feed the SMS Risk Assessment and Management processes and to the pilots for pre-flight planning:

Understanding and mitigating the risk of Birdstrikes: New videos available.

Both EASA and the FAA have observed an increased reporting of bird strike occurrences on helicopters, thereby elevating the risk of potential serious injuries or fatalities to occupants and substantial damage to rotorcraft.

Check out this new video from Airbus Helicopters with the experts view:

There is also another interesting video from HAI on how to avoid them and report them.

Focusing on risk avoidance at the pre-flight planning stage:

Define and implement Bird Strike safety procedures to reduce the risk of bird strike when operating in areas of known bird concentrations:

NGTF Training – Bird Strikes – What you need to know

What a great bird-strike information resource this is.