After false starts in 2020 and 2021, as the summer of 2022 approached we finally started to see the recovery that we had all been waiting for. The summer of 2022 saw airports filling up and aircraft finally taking to the skies in greater numbers. Across the industry there were new challenges to deal with as borders opened up and passengers returned. With this came issues with spooling up a complex system in a relatively short period of time.

In this Air Ops Review for 2022 you will get a short and easy to understand update on safety in Commercial Air Transport (CAT) operations with fixed wing aircraft over the past year. There will be some useful graphs to help you understand what's happening and most importantly where we observe the greatest risks at global/ European level. You can use this information to help understand the risks you face in your own organisation.

In 2022 there were eleven (11) fatal accidents worldwide in CAT operations with large aeroplanes with a maximum take-off mass greater than 5,700 kg. The number of fatal accidents in 2022 was the same as the previous 2 years. There have not been any fatal accidents involving an EASA Member State (MS) operator since 2016.

You can find a full list of the fatal accidents that occurred in 2022 at the end of this article. There is basic information about each accident and what is known at this stage of the investigation. 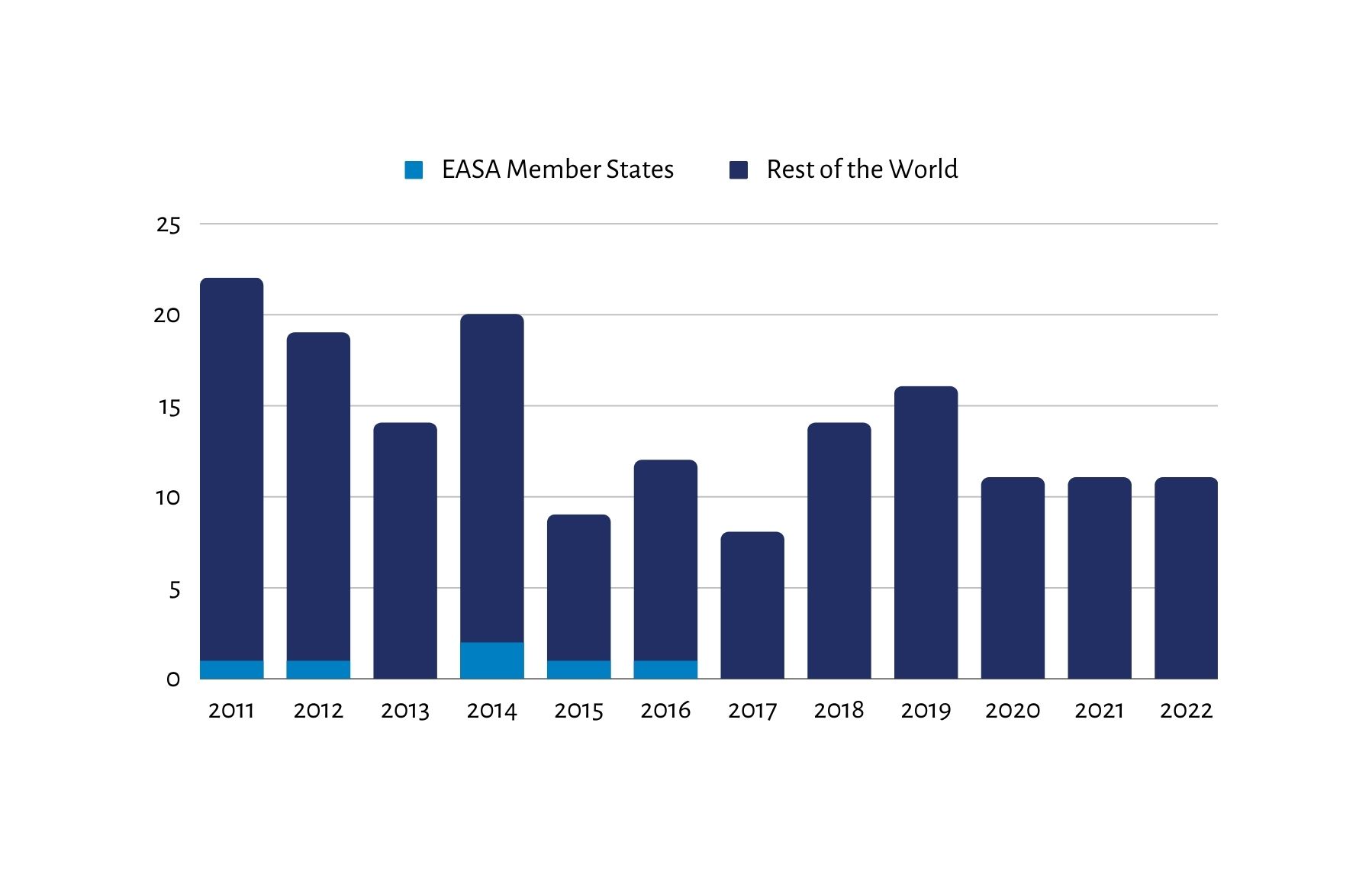 A continual reduction in worldwide fatalities, but this should never lead to complacency in our safety efforts

The graph shows the considerable improvement in safety over the past few decades. The high safety level has been hard won. This means we can never be complacent in our safety efforts. It's vital that we continually seek to identify risks and manage them effectively. More on this shortly. 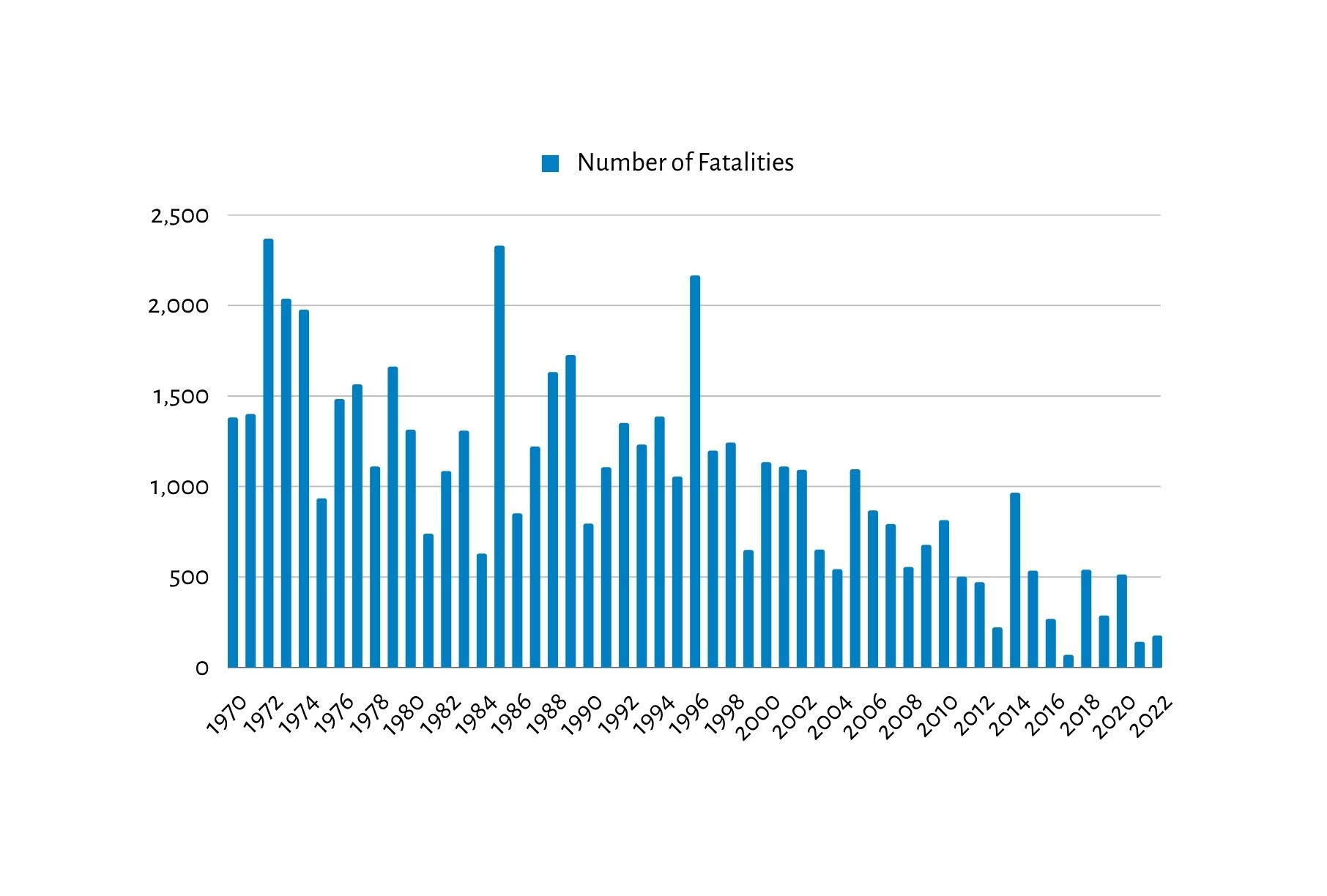 There were various different types of accidents in 2022:

Before we get into the most important safety issues, it is useful to start with a some information about the SRM process that is used to identify them. EASA develops safety intelligence from a range of different sources. We use accident reports, mandatory occurrence reports as well as expert judgement through our Collaborative Analysis Group (CAGs) with industry, the Network of Analysts (NoA) with the National Aviation Authorities and also the EASA Advisory Bodies.

Once the safety issues are identified, they go through a Safety Issue Assessment (SIA) to determine what actions should be taken in the European Plan for Aviation Safety (EPAS). One of the biggest challenges is to prioritise the safety issues and this is where the SIPI comes in. This is a risk classification, based on the European Risk Classification Scheme (ERCS), that considers its residual risk and additional elements such as historical accidents, the novelty of the issue and the level of exposure during operations.

Based on the SIPI scores and the different analyses carried out, the top safety issues for commercial fixed wing operations are below. The full list will be published in January 2023 in Volume III of the EPAS. You should consider the relevance of these safety issues for your own organisation. Talk about them with your operational teams, consider your level of exposure and what additional mitigations you might need to put in place.

According to our preliminary data, the following fatal accidents occurred during 2022:

Thank you, John, for these easily understandable interesting informations! As a "semi" - retired Aviation Psychologist I can´t help but still monitoring closely all news and on-goings in the Aviation world - which had always been "my" world and concern...! Regards, Sibylle