Electric propulsion was first introduced into the market of self-sustaining sailplanes in 2014. EASA subsequently certified the first ever fully electric general aviation aircraft during 2020 in the form of the Pipistrel Velis Electro. The aircraft is equipped with a battery-based energy storage system coupled with an electro-motor for propulsion that provides 57.6 kW of power. When charged on the basis of renewable energy sources, this allows for a zero emissions flying time of about 55 minutes. With no audible engine noise, it can be up to 10 decibels quieter than an equivalent Pipistrel piston-engine aircraft when measured according to the noise standard of ICAO Annex 16, Chapter 10, which is perceived by people as 50% quieter. The market response to the aircraft has been positive, with Pipistrel planning to increase production capacity to 120 Velis Electro aircraft per year in 2022.

Due to the enhanced noise and emissions performance and limited range, battery-powered electric aircraft have been identified as optimal for pilot training in the vicinity of airfields. They are already being used by Approved Training Organisations in various European States where a new generation of pilots are learning to fly in an electric aircraft. The transition has been incentivised through the use of solar panels on aircraft hangars with battery storage systems and chargers that can be used to support all electric vehicle activities at an airfield. Reductions in operational costs of around 30% have also been achieved through the reduced time needed to warm up the propulsion unit and perform pre-flight checks, leading to more actual flight time.

Additional projects are being taken forward by Heart Aerospace for Finnair in the form of a 19-seat regional electric turboprop and Eviation for DHL who expect to deliver an ‘eCargo’ aircraft in 2024. Hybrid aircraft configurations are also being developed, such as the Tecnam P2010 H3PS. Continuing technical challenges linked to battery technology include the need for increased energy density to reduce weight and increase flight time duration in order to expand the operational uses of electric aircraft.

The use of hydrogen as an aircraft fuel or energy source has previously been shown to be technically feasible, with one engine on a Tupolev Tu-155 modified to run on hydrogen in the 1980s. The price and availability of hydrogen within the aviation system, as well as the complexity of on-board storage have until recently made this architecture unattractive when compared to use of kerosene-based fuels. The increased focus on CO2 emissions, coupled with the greater availability of renewable energy sources that permit the production of “green hydrogen” have rekindled interest in this potential alternative. The Airbus ZEROe initiative is aiming to develop a zero CO2 emission commercial aircraft that will enter into service by 2035.

Hydrogen can be used in conjunction with fuel cells to produce electricity to power electric motors, or through combustion in a gas turbine engine, similar to kerosene, to provide mechanical energy. When used within fuel cells the only emission is water, whereas hydrogen powered gas turbines generate combusted emissions, including water and NOX. In both cases the water vapour emissions are markedly higher than those from kerosene. However, particulate matter emissions are considered to be zero, and hence the formation of persistent contrail-induced cirrus is likely to be less pronounced. The latest estimates suggest that hydrogen used in conjunction with fuel cells could reduce the climate impact in flight by 75 to 90 percent, and when used for combustion the reduction could be 50 to 75 percent [20] [21] . However, further research is needed in this area to fully understand the emissions reduction that could be achieved and the associated impacts.

Some early hydrogen powered prototypes are being developed, such as APUS i-2, H2FLY’s HY4 and ZeroAvia’s retrofitted Piper M-class. However, technical challenges remain. While the higher energy density of hydrogen would allow for a significant reduction in required fuel mass, the volume of hydrogen would need to be four times more compared to kerosene for the same amount of energy, even when stored in liquid form at -253⁰C.

In order to address these challenges, one of the three pillars within the Clean Aviation research initiative is hydrogen and is focused on developing the associated technology and regulatory requirements. 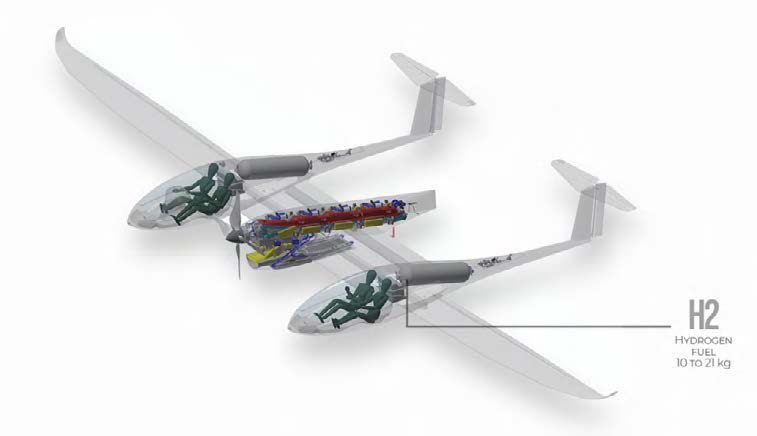