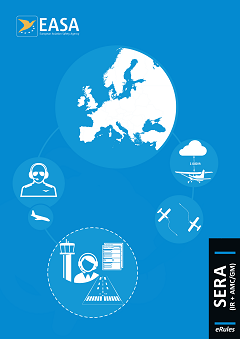 ANNEX: Rules of the Air

Without prejudice to SERA.1001 above, this annex addresses, in accordance with Article 1, in particular airspace users and aircraft:

(a) operating into, within or out of the Union;

(b) bearing the nationality and registration marks of a Member State of the Union, and operating in any airspace to the extent that they do not conflict with the rules published by the State having jurisdiction over the territory overflown.

This annex addresses also the actions of the Competent Authorities of the Member States, Air Navigation Service Providers (ANSP), aerodrome operators and the relevant ground personnel engaged in aircraft operations.

SERA.2005 Compliance with the rules of the air

The operation of an aircraft either in flight, on the movement area of an aerodrome or at an operating site shall be in compliance with the general rules, the applicable local provisions and, in addition, when in flight, either with:

(a) the visual flight rules; or

(b) the instrument flight rules.

GM1 SERA.2005 Compliance with the rules of the air

Such local aerodrome regulations may contain requirements for the operation of the aircraft transponder on the movement area of an aerodrome with the intent to ensure provision of surveillance data to the air traffic services unit providing services at the aerodrome, as well as other aerodrome units (e.g. apron management services).

(a) Responsibility of the pilot-in-command

The pilot-in-command of an aircraft shall, whether manipulating the controls or not, be responsible for the operation of the aircraft in accordance with this Regulation, except that the pilot-in-command may depart from these rules in circumstances that render such departure absolutely necessary in the interests of safety.

Before beginning a flight, the pilot-in-command of an aircraft shall become familiar with all available information appropriate to the intended operation. Pre-flight action for flights away from the vicinity of an aerodrome, and for all IFR flights, shall include a careful study of available current weather reports and forecasts, taking into consideration fuel requirements and an alternative course of action if the flight cannot be completed as planned.

SERA.2015 Authority of pilot-in-command of an aircraft

The pilot-in-command of an aircraft shall have final authority as to the disposition of the aircraft while in command.

SERA.2020 Problematic use of psychoactive substances

No person whose function is critical to the safety of aviation (safety-sensitive personnel) shall undertake that function while under the influence of any psychoactive substance, by reason of which human performance is impaired. No such person shall engage in any kind of problematic use of substances.